(If you are here because you were tricked, you can throw some words my way on rickroll@kaspergrubbe.com or by sending a tweet to @kaspergrubbe)

I found a project on Github named mobile-rr, by a user called idolpx. His project includes a little wifi-chip that includes a piezo buzzer, and when people connect they are promised free wifi, but instead of getting access to the internet, they are shown a video of Rick Astley singing “Never gonna give you up”.

This is a so called Rickrolling prank, and if you have been living under a rock the past decade, the prank involves bait-and-switch where a link on a webpage promises to bring the user to some unrelated material, and bam! they are now listening to the tunes of Rick Astley and they can consider themselves rickrolled.

The original project only beeped when a person was tricked, and if you wanted to know the score, you had to connect to the device, and go to the right webpage. I decided to improve the project by adding a screen: 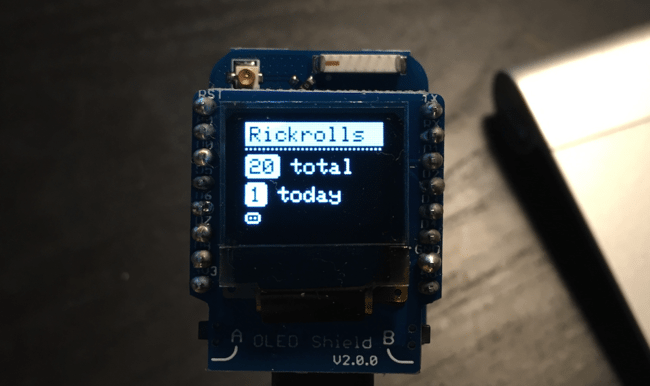 You can find my code here: https://github.com/kaspergrubbe/mobile-rr, and here you can see a list of components (unaffiliated links):

I was looking for a company to help me build a small prototype for an idea I had for a mobile application. So to find a company I asked around, and someone mentioned the company Boolex. I naturally wanted to check out the quality of... Continue →